News: Only one-third of all tech teams consist of women: Survey

The report titled “Women in Technology 2018: Breaking Gender Barriers”, explored the state of female technologists across the globe and the challenges faced by them in the workplace. The survey found that despite 86 percent of the respondents having a formal degree in computer science, a majority of them believe there is a hiring bias for technology related roles, and there exist roles which are more challenging for women to enter. In fact, after a point, most women at these organizations experience a stagger in their career growth, with only 2 percent being promoted to leadership roles.

The survey that saw the participation of developers from Asia, Africa, Europe, North America and South America reveals that 72 percent of the respondents are currently working as software developers and respondents with roles such as Product designers, QA developers, System Admins, and Engineering Managers were in the minority.

While almost 80 percent of the women are working full-time or part-time, only 53 percent are seeking new roles and only 11 percent said that they wouldn’t consider a new offer.

The report further highlights the issue of biased recruitments and the ways in which organizations can hire and retain more women in technology-based roles. Here are a few more insights from the survey:

The average tenure of most of the participants of the survey was only 0 to 2 years, with only 5.3 percent choosing to stay at the same organization for more than 8 years. HackerEarth has also created a job satisfaction index which shows that 48 percent of the respondents surveyed are satisfied to an extent in their current jobs. On the other hand, about 69 percent of the women stated that the reason they would consider moving to a new job is to work with emerging tech. For 63 percent of them, higher paycheck is another attractive tool to make them switch and for almost 48 percent it is the option of flexible hours that would make them choose a company. 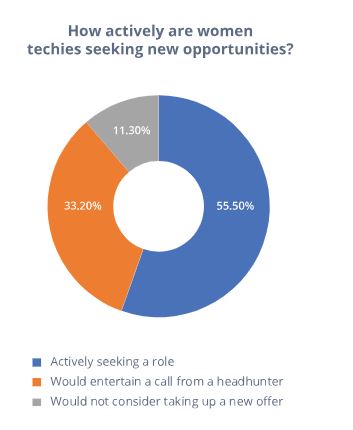 58.3 percent of the African American women and 43 percent of Hispanic women have identified unequal hiring practices as the key issue when it comes to gender disparity in tech roles. Gendered wording in job adverts has also been identified as the main barrier for women to apply for jobs of their choice. 50 percent of the respondents believe that job adverts for technical roles tend to have gendered wording, which discouraged them from applying for the position. Further, about 62 percent of the respondents have also supported the claim that blind recruitments can improve technical hiring among women.

Solutions to hire and retain more women in tech

Factors which encourage women to continue their career in technology include growth opportunities, better work-life balance, opportunity to work on exciting new technologies, flexibility, better compensation and adequate training. Installing worker-friendly policies, child care services and flexible schedules can help women rise to better positions. While only 19 percent of the respondents cite that their organizations were “not at all family-friendly”, more than 50 percent said that their organizations had some policies that are family oriented. 81 percent of the respondents also felt that their organizations valued their opinion and 71 percent responded that their employers provided adequate opportunities for women looking to rejoin the workforce after a long break. 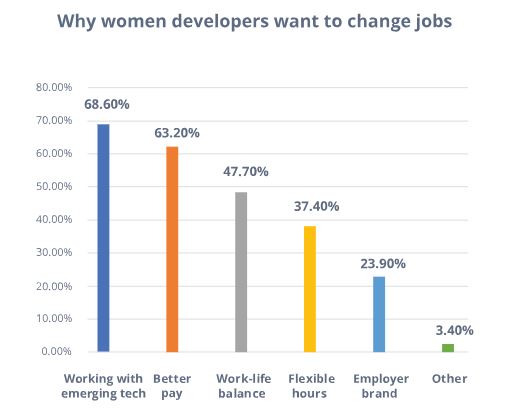 Vivek Prakash, CTO and Co-Founder, HackerEarth said, “Implementing policies to support women in the workplace and providing them with training and resources will help reduce the high attrition rates we have observed amongst women technologists. We believe that the best place to start is in the recruitment phase itself as it reduces the chances of any kind of bias while hiring.”

While there is still a long way to go have more women taking up a career in technology, solutions such as blind recruitments, building family-oriented policies, and upskilling opportunities may help women excel in their careers and reduce gender disparity in organizations.

Drishti Pant is Manager - Content & Special Initiatives with People Matters. You can reach her at drishti.pant@gopeoplematters.com
NEXT STORY: Ex KPMG Partner joins EdCast as President

Why startups need their own culture and how to build it?

Why a strong sense of purpose is good for business

What should you do when an employee discloses a mental health condition?