Blog: The Power of Mind

Over the years since the foundation of Psychology in 1894, ‘Mind’ has significantly lost its space to Neuro Sciences which have been scientifically establishing the functions of the brain and its neurological systems to explain human capabilities to process, store & recall information; to see, hear & respond; to express emotions and to communicate using languages etc.

As scientific explanations evolved over time, a large part of ‘Mind’ today can be co–related to the functions of the Brain and its neurological network. Neuroscience research has made progress along a multilevel hierarchy from behavior and emotions to molecular interactions and genetic expressions. Experiments have clearly established that the human brain has specific areas identified for each trigger like emotions, memory, intelligence, knowledge, senses etc. and the impulses to and from these earmarked spaces are carried by the intricate network of neurons, which continue to grow upto a certain age. These studies have reflected the increase in activities of specific parts of the brain that are activated by each trigger. The question still remains as to how do we control these triggers? How do we prioritise an impulse or an activity over the others? We have often heard our well-wishers advising us to stay focused. Focus on what? How? Despite the evolution in the journey of Mind, from being a whole and sole virtual entity driving our thoughts, feelings, emotions to a more defined brain with its neurological system, there is a “mysterious something” or Mind, that still needs to focus, in order to trigger stimulus to the desired section of the brain.

Human beings play different roles in their daily lives… a spouse, a son or daughter, a parent, a student, a teacher, a boss, a subordinate, a team member etc. Each role has a defined framework within which it operates. None of these roles are uni-dimensional. A corporate senior executive is not only a boss in office, (s)he will be a subordinate to his or her boss, (s)he will be a team member along with his or her peers, (s)he will be a negotiator with his or her internal and external stakeholders and many more. The days we perform our roles effectively, paying appropriate attention to their dimensions, turn out to be the most productive days in our lives and we feel happy. In today’s world our roles have multiplied and the nuances of each role have become complex. While understanding each role is important, executing them to their potential depends on how well we have tuned our Minds to stay engaged to suit the roles we perform. A few examples may explain…

A Piano student makes mistakes on the same musical piece in different places when (s)he plays it multiple times, without repeating the same mistake

A multitasking corporate senior executive does not listen to an intent conversation with his colleagues, and delivers a misinformed decision

A busy boss conducts a critical appraisal discussion with one of her key team members, interrupted with multiple calls, ends up in a conflict

A student’s role demands him or her to listen and pay attention in class. Likewise, playing a musical piece or speaking on a topic demands full engagement with the piece or the topic. An important appraisal discussion, especially with a key member of the team needs empathy. Allowing any thought, feeling or emotion which triggers a different stimulus, increasing the activities of other parts of the brain, not relevant, is bound to be counter-productive. Not only the growing children or the teenagers, but also grown up adults in any facet of life will struggle if they are unable to tune their Minds to play a role or its nuance effectively.

Playing roles in our daily lives are synonymous with acting, where actors characterize different personas. The process starts with understanding the character and it’s personas in the context of a story as the character unfolds within that story. Studies were conducted with actors portraying characters that they themselves are not, trying to establish a connection with the activities in the brain, which have remained inconclusive. From my own acting experience and my experience of training actors for Theatre, the process may be explained by the picture below. 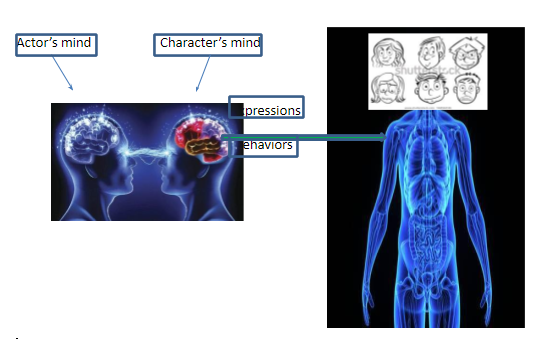 The Actor understands and conceives the character, maps the personas of the character onto his or her own Mind, which in turn triggers the required behaviors and expressions in the context of the environment or the situation, in which the character interacts. How different is this process from the roles we play in our daily lives?

I don’t see any difference. The success or failure of our roles depends on how well we understand them and how well we can stay engaged with them. Understanding the roles may be a direct outcome of the time we invest in each of them and the process we adopt. More experiential the process is, the better should be the outcome.  Staying engaged is an aspect which depends on how well our Mind can quickly put the guard rails and channelise all energy to stimulate the right parts of the brain to continuously support the engagement. This aspect of Mind is still a hypothesis and Science hasn’t yet been able to pin it down and connect it to any physical matter of our body. There are various practices which promise to discipline this aspect of our Mind, including meditation, breathing exercises etc. Many of those who practice them have reported improvements in the health of their Mind and body over a period of time. How it happens is still a mystery.

If Mind is the guiding force of the stimulus or the energy to trigger the correct section of the brain or its network of neurons to function, keeping Mind in check, becomes imperative for mankind to attain desired levels of effectiveness. It is believed and has even been demonstrated that meditational practices help Mind to focus and not to wander. This would mean that the mysterious Mind can possibly be trained over a time curve.

American University of Antigua in their article on “Take Control and train your brain” reported that, “Neuro-scientists from Harvard Medical School and Massachusetts General Hospital have conducted multiple studies and found that there is a significant increase in cortical thickness in those who meditate. Scans showed that 50 year old meditators have the same amount of prefrontal cortex as 25 year old meditators, suggesting that meditation practice may slow age-related (natural) thinning of the frontal cortex. The prefrontal cortex houses active and working memory in addition to governing executive decision making. At the same time the studies also showed a marked increase in the left hippocampus which assists in learning, memory, and emotion regulation and a decrease in gray matter was seen in the amygdala. The amygdala is known to increase with stress, yet it began to decrease in size after meditation even when participants were still exposed to the same environmental stressors.” Personal experiences of the meditators reveal that the early stages of practice can be a tad frustrating – “the Mind flutters and wanders about, the slightest disturbance throws us off, and unwelcome thoughts pester us annoyingly.” Over time Mind settles into the right rhythms and focuses more.

The power of Mind is unexplored to a large extent. We have departed from fundamentals to train our Minds as our life became faster and more complex. The importance of understanding our roles and truly staying engaged with them cannot be undermined. Most often we would jump into roles without understanding the required emotional construct for it. Students will be given tasks to handle without preparing their Minds to engage with them. Employees will take up roles which would be half understood or hardly explained. It's almost like taking a plunge in a deep water body with no training on swimming. Yes, one may learn to stay afloat and even swim but it would be at a risk of getting drowned.

Susanto Banerjee is a Change Catalyst who has served Corporates in Paints/ IT/ Pharma industries for 27 years in various leadership roles including CFO and CHRO. He is an independent consultant in Financial and Business Transformation space. He is the Founder of Ventures, a theatre based activity platform for Behavioral Learning and pure play theatre where he coaches, directs and acts.
NEXT STORY: Future of work in the e-commerce industry will be different, all thanks to COVID-19

Organizations’ return to office playbook for 2021: Part I

What the world is doing right now is not REMOTE WORK, but work from home

Tech hiring in 2021: Predicting the important trends of the new decade

Mateen Thiruselvaam on the non-negotiables for a hybrid workplace

The basics of culture-building in a new hybrid workplace

'Working from Home is NOT a piece of cake'