Article: How tech, and the private sector, can help heal our planet

While the current environmental outlook is daunting, there are nevertheless increasing signs of collective resolve. What's essential is to sustain sustainability, not just on World Environment Day, but every day — transparently and authentically.

First, the bad news: The world has already lost 80 percent of its forests, and we’re continuing to lose them at a rate of 375 square km per day. At the current rate of deforestation, up to 10 percent of tropical forest species will become extinct every decade. We have an island floating in our oceans – the size of India, Europe, and Mexico combined – consisting primarily of discarded plastic.

Those statistics come from Denmark-based environment data aggregator The World Counts. “We are using up 50 percent more natural resources than the Earth can provide,” the agency reports. “At our current population, we need 1.5 Earths, which we do not have. Up to 27 percent of our coral reefs have been destroyed. If this rate continues, the remaining 60 percent will be gone in 30 years.”

That makes for grim reading on this World Environment Day. The pandemic has also added a layer of uncertainty, with millions being pushed into poverty, growing inequalities among people and countries, and scarce resources diverted to fight COVID-19.

“We’re witnessing a triple environmental emergency of climate disruption, biodiversity decline, and a pollution epidemic that is cutting short some nine million lives a year,” the UN Secretary-General António Guterres noted in his video message earlier this year. “This is a critical year for us to reset our relationship with nature. Governments and people need to understand that all environmental, social, and economic challenges are interlinked in their very DNA – and they must be tackled together.”

Given all of this, two questions need to be asked: How can technology help alleviate some of the damage the Earth has suffered? And can governments alone bear responsibility for ensuring the health of our planet?

The good news is that today's transformative information technologies can help in profound ways if they become increasingly applied to environmental problems. Here are a few initiatives that might serve as inspiration:

Agriculture: IBM is helping Yara International, a global crop nutrition company based in Norway, build a digital farming platform. It leverages AI, blockchain, hyper-local weather data, and knowledge about crops to give "smallholder" farmers recommendations tailored to individual fields to increase production, save water, and decrease the amount of fertilizers and pesticides needed.

Energy & Climate: In Europe, IBM is working with Eqigy, a consortium of four electrical grid operators -- TenneT, Terna, Swissgrid, and APG -- to help assemble a platform to balance the supply and demand of electricity across electric grids. (IBM is applying blockchain technology to underpin it). What’s innovative is that this platform helps grid operators access electricity that’s stored in privately owned devices such as electric vehicles, batteries, and solar panels to better balance supply and demand.

Recycling & Oceans: IBM is building a platform for the Alliance to End Plastic Waste that can consolidate baseline data about plastic generation, consumption, and waste in order to improve opportunities for reuse and recycling. IBM is also integrating United Nations Environment Programme's (UNEP) data into a central repository to better visualize plastic waste across the world’s coastal oceans.

And speaking of oceans...

Oceans make up to 70 percent of the mass of the Earth. According to the UN Inter-Governmental Panel on Climate Change, the oceans are warmer, more polluted, depleted, and more unpredictable than ever. Every year, an estimated eight million metric tonnes of plastic go into the seas, infiltrating food chains and threatening marine life. By absorbing excess carbon dioxide created by human activity, the oceans are growing ever more acidic, impacting some species’ biological development and destroying important habitats like coral reefs.

There are severe consequences for life on land too. While the global importance of the Amazon rainforest is well known, the ocean, and oxygen-emitting phytoplankton that live in it, may, in fact, the “lungs of the planet,” producing about half of the air we breathe. The economic value of marine and coastal industries is worth about US$3 trillion a year. How can tech help monitor the oceans?

The growing maturity of autonomous technologies offers a potential path. ProMare, a marine research organization, uses advanced technologies on the Mayflower Autonomous Ship (MAS). Named after another famous ship from history, the Mayflower will use machine learning (ML) and solar energy to traverse the oceans, gathering and transmitting information to help us understand vital ocean health.

What can companies do to perpetuate environmental sustainability? Over the past year, more companies expressed their commitment to achieving net-zero greenhouse gas emissions within a specific period. The number of such “net zero” pledges has doubled. However, this commitment to sustainability can only be successful if it entails more than just a corporate social responsibility (CSR) approach. 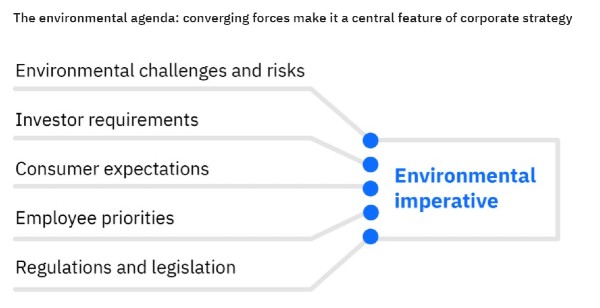 All of us, including businesses and citizens, must play a part in environmental restoration and sustainability. We need to integrate the planet’s health throughout our plans and policies. Although more than 50 percent of global GDP depends on nature, the world’s capital bound up in nature has declined 40 percent in just over 20 years.

This has led the WEF (World Economic Forum) to list biodiversity loss and ecosystem collapse as one of the top five threats humanity will face over the next decade. “The economics are clear,” Guterres says. “The urgency for action has never been clearer. We must generate a global will for action and transform of our relationship with nature.”

According to the New Climate Institute, only 9 percent of pledging companies have a roadmap to reach those goals. It needs to go from the static piece of paper that’s rolled out once a year to actually being embedded in everything companies do on a day-to-day basis. Compliance is the first step, but companies must move to create different values, and change the business model, among other initiatives.

According to the New Climate Institute, only 9 percent of pledging companies have a roadmap to reach those goals. It needs to go from the static piece of paper that’s rolled out once a year to actually being embedded in everything companies do on a day-to-day basis.

A big challenge? Being able to grasp the full scope and complexity of the process. “The environmental challenges are very complex because they cut across many stakeholders, many organizations, and even many industries,” says Jacob Dencik, global economic research leader at the IBM Institute for Business Value (IBV). “You need transparency into what goes on through a whole value chain across many different organizations and many industries.”

The commitment to act now needs to be a key deliverable for corporate leaders. For instance, in 2019, IBM became a founding member of the Climate Leadership Council, supporting its bipartisan plan for a carbon tax – with 100 percent of the net proceeds returned to citizens as a carbon dividend. And among IBM's many voluntary environmental goals are our commitment to procure electricity from renewable sources for 75 percent of IBM global electricity consumption by 2025 (with 90 percent by 2030); reduce IBM's greenhouse gas emissions by 65 percent by 2025 versus 2010, and thereafter achieve net-zero greenhouse gas emissions by 2030 --all while deploying Researchers to help accelerate the discovery of advanced materials for carbon removal.

While the current environmental outlook is daunting, there are nevertheless increasing signs of collective resolve. What's essential is to sustain sustainability, not just on World Environment Day, but every day — transparently and authentically.

How tech, and the private sector, can help heal our planet

Here's the framework for designing a gamified learning program