The WEF Jobs Reset Summit continued today with another series of insightful sessions, panel discussions and conversations that really began to give a clearer outlook on the future of jobs, setting new standards for work, building a more human-centric culture and possible recovery scenarios. Some of the key themes raised were:

While some $3 trillion has been spent on recovery, Guy Ryder, Director-General of the International Labour Organization, pointed out that responses have varied largely from country to country, highlighting a distinct and concerning “lack of international common purpose in this effort,” that would need to be addressed sooner rather than later. “COVID-19 has exposed the precarities and inequalities,” he said, and Ryder fears these inequalities could be accentuated further if we don’t consciously build equity, social protection and a “renewed social contract” into any recovery strategies made going forwards.

Focus on those who are hurting the most

Data shows pandemic-related job loss and suffering is falling particularly hard on women. “In both developing and emerging economies women take on most of the burden of caregiving,” said WEF Managing Director Saadia Zahidi, “and now they have a double-double shift.” With school closures and added pressures of taking care of dependents and loved ones, women are potentially experiencing a disincentive to return to the workplace. The repercussions of this are enormous. “Frankly, that would end up reversing all of the gains that have happened in recent decades,” Zahidi said. This could potentially create a situation in which “the office becomes a place for men to return to and not for women.”

Setting New Standards for the Future of Work

To start, Gratton highlighted WEF research into the Five Imperatives for Resetting the Future of Work: 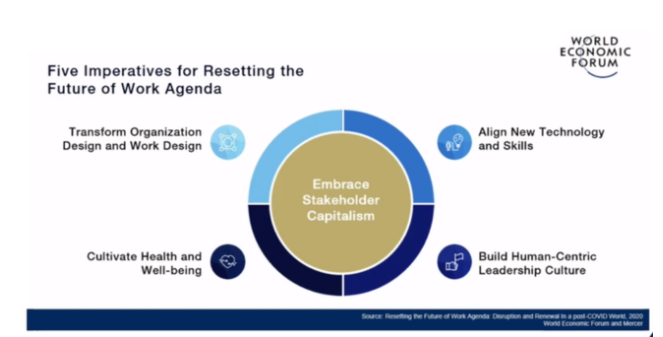 “If we’re going to Build Back Better, what does that ‘Better’ look like?” Gratton asked. “What role can we as individuals play to ensure we’re fashioning the kind of jobs that are right for us, but importantly what role can corporations play and indeed what role can governments and governmental institutions play?”

“The New Normal is the Now Normal”

In terms of automation, Mahindra Group’s Harshvendra Soin began by saying that, “the New Normal is The Now normal.” Hyper-automation has given businesses access to collaborative intelligence that was never there. “When we talk about alternative workforce,” Soin said, “there are two elements: the talent economy is focused on high-end skills that demand a premium price and then there is the gig economy, focused on commoditizing skills where price becomes the key difference.”

Soin quoted MIT digital transformation expert Jeanne Ross who said “clearly, the thing that’s transforming is not the technology - the technology is transforming you.” Working with these technologies will be key in unleashing jobs of the future, but it’s important workers are trained in the skills necessary to use them.

Dial-up employee-listening and make decisions off the back of data. In their last survey, Standard Chartered found 74% of their almost 100,000-strong workforce foresee they will spend a minimum of 50% of their time working from home. However, a low percentage wanted to work-from-home all the time. Thus, a hybrid model will be brought in based on this data.

A fundamental redesign of work. It was found that 80% of Standard Chartered roles can be done with more flexibility. Thus, a fundamental examination and restructure of how work actually gets done is an opportunity and a necessity to build a better future.

An opportunity not just a threat. “What started off as a pandemic is a massive opportunity for innovation and inclusion going forwards.” To do this, recovery cannot be top-down only, Kapilashrami said. Standard Chartered are crowdsourcing ideas from employees on how to create water-cooler moments in a hybrid world of more serendipity, cohesion, collaboration and creativity. “This cannot be a change that is done to our people, it’s a change that must be done with our workforce and our people,” Kapilashrami said.

There’s very little we can predict about the future and it’s hard to know exactly what workers want. For that reason, employee-listening and making decisions based on data are absolutely critical. However, as Gratton rightly points out, we shouldn’t make snap decisions either. “It hasn’t been long enough for people to know yet what they want.”

Echoing some of the earlier sentiment expressed about widening inequalities, Stefano Scarpetta said we must fix the gap in social protections before we can begin to rebuild better. “The issue of skills is going to be fundamental,” he said. “The crisis is simply accelerating changes already underway. How do we make sure that workers are equipped?”

Lifelong learning is simply not a reality for low skilled workers in the same way it is for high skilled workers, and this is driving increased inequities. It’s going to take effort from every sector to remedy this problem: “Governments can’t address these issues alone,” Scarpetta said. “The business sector has to play a fundamental role. The speed of change means that regulations tend to follow. We need to rethink public private collaboration.”

As we can see, the fundamental takeaways from Day 2 of the WEF Jobs Summit are that a better world of work must be underpinned by data and consensus-driven decisions, boosted by technology, emboldened by collective, global solidarity and inclusive of those populations living in immense precarity whose circumstances have been impacted by the pandemic most.

Maia Jenkins is a writer and teacher based in the United States. She has written for various publications, including British GQ, the Threepenny Review and Grazia. She is also winner of a Pushcart Prize.
NEXT STORY: Dr. Paula Caligiuri on building cultural agility