The Co-Founder of WhatsApp Brian Acton has decided to quit the company and start his own venture.

His venture is still not clear but according to Forbes’ estimates, Acton’s net worth is at $6.5 billion.

Acton also updated his decision on Facebook wherein he wrote: “After 8 years at WhatsApp, I have decided to move on and start a new chapter in my life. I am very fortunate at my age to have the flexibility to take new risks and focus on what I'm passionate about. I've decided to start a non-profit focused at the intersection of non-profit, technology and communications. It's something I've thought about for a while, and now it's time to just focus and execute. I'll have more to share in the coming months. This decision is, of course, a tough one. I'm proud of what our team has accomplished in only a few years, and it's humbling to see that so many people rely on WhatsApp every day.” 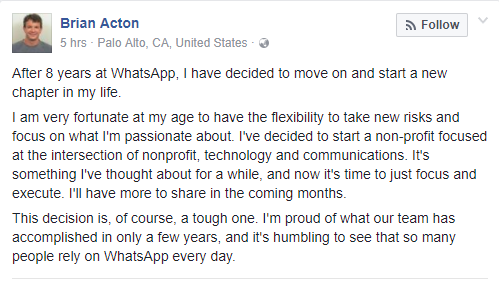 WhatsApp was bought by Facebook in 2014 for $22 billion cash and stock. Acton received about $3 billion for his stake in Whatsapp. He donated Facebook shares worth nearly $290 million to the Silicon Valley Community Foundation following Facebook's acquisition of WhatsApp.

Acton is a Stanford Alumnus and with Jan Koum founded WhatsApp in 2009 and both of them used to work for Yahoo before starting WhatsApp. Acton applied for a job at Facebook and was rejected five years before the social media giant bought WhatsApp.

According to a report, Acton was leading the engineering internally for WhatsApp, and his role won’t be filled in by any one employee post his move from the company.

WhatsApp recently launched ‘WhatsApp for Business’ which aimed at simplifying businesses’ interactions with customers. WhatsApp with a 1.3 billion customers still doesn’t generate any revenue but is looking to look at making money and the company is on a hiring spree for number of key positions.

Read more on WhatsApp for Business - Can it redefine organizational communications

Erudit AI launches in the US

How are you tracking performance of your employees in a post-COVID workplace?

READ the February 2021 issue of our magazine to find out how organizations are doing it.