Analysis of the survey data pointed to a number of difficulties young Malaysian men and women encounter in their transition from school-to-work. The survey also revealed mismatches and popular misperceptions about the relationship between the supply of and demand for young people in the labor market and identified features of the labor market urging policy interventions.

The survey carried the time period between late 2017 to early 2018 and interacted with the youth between 15 to 29 years of age.

According to the survey a fresh graduate is likely to accept a salary of RM 1,550 for a starting job. First-time job-seekers had higher expectations in the beginning but as they got more experienced, they lowered their salary expectations.

KRI research said that students holding bachelor degree had lower salary expected salary expectations, at RM1,900 and those with higher qualifications were asking for RM2,000. Meanwhile, postgraduates only had a median salary expectation of an average of RM2,200. This has led to a mismatch in supply and demand, with industries holding out for cheap labor and too many graduates that do not qualify for the jobs that are already in the market. Due to this, about 85% of workers with tertiary qualifications take up low-skilled or manual jobs. 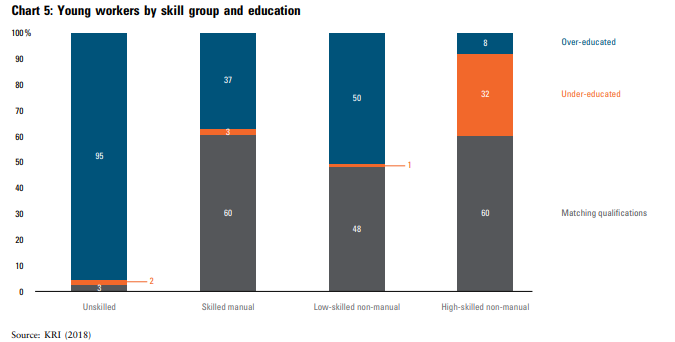 The survey also found that a growing number of young people are taking up jobs which offer them less security and legal protection or embracing the “gig economy” where the job is unstable or insecure. Based on the research, 32% of youths aged 20 to 24 already work in the informal sector while 20% of those aged 25 to 29 are already employed informally.

Former Associate-Editor, People Matters. You can contact him at +918010998491
NEXT STORY: Tableau APAC appoints Sapna Saxena as Senior Director, HR

Why is HR Tech industry the next most booming industry?

Corporates hunting for talent with digital skills, but can campuses fill the gap?