Article: The cost of presenteeism

Glancing at his watch, Harold reluctantly leaves his seat to attend the weekly team meeting. People in the room can sense that Harold is not fine but impeccably brush their concerns under the assumption of the feud between him and his client. What followed next left everyone in the room flabbergasted.

Harold, aged 24, is an engineer at a multinational company. He loves his job; however, recently he was not keeping well. For some time he was experiencing sudden headaches, nauseousness, body aches. But he went to the office regularly and quietly lived with discomfort. Fast forward to the present day, Harold experienced a panic attack while he was in a meeting.

The story of Harold is inspired by all the employees who keep coming to work when they are not fit enough to do their jobs. Working when you are physically or mentally unwell is called presenteeism – and it is becoming commonplace these days.

According to a report by Vitality, more than 40 percent of employees said their work was being affected by health problems –a figure that's risen by a third over the last five years. It found that people are putting aside both mental and physical health problems to attend work. Some employers might wonder why presenteeism should be considered a problem at all. Experts say this is a dangerous way to look at things. The obvious risk that employees take with their health and that many ailing workers struggle with longer-term afflictions like depression will worsen if they go unaddressed.

Read this story of Chole Parker, sharing her experience with Vitality for their Health Report, 2019. When Chloe returned from maternity leave to her job as a Senior Associate at a London corporate law firm, she had just been diagnosed with postnatal depression. She kept silent about her condition and didn’t inform her family members about it. Later, she informed about her depression to the human resources team at her firm, as well as the partner who was supervising her. The HR staff were “brilliant”, she says, because the firm, externally at least, was “all about diversity and trying to keep women”. But “at the coalface”, she adds, her supervising partner reacted terribly. She was given accommodations such as being allowed to attend counseling sessions mid-afternoon before going home early. Yet within “the culture of perfectionism that is a law firm,” says Parker, her supervising partner made it “very clear to me that he was not happy” with the situation. Eventually, she says, this partner became sharply critical of her and it just spiraled downwards to the point that she had a breakdown at work, was signed off sick by her doctor and never went back.

The once high-flying lawyer says she could now never rejoin the profession she was trained for. Chole and her employer paid the cost of neglecting her mental well-being. While Chole was aware of her mental health and still kept coming to office, the next story of Sarah Mitchell-Hume will reflect the current ignorance towards mental illness. 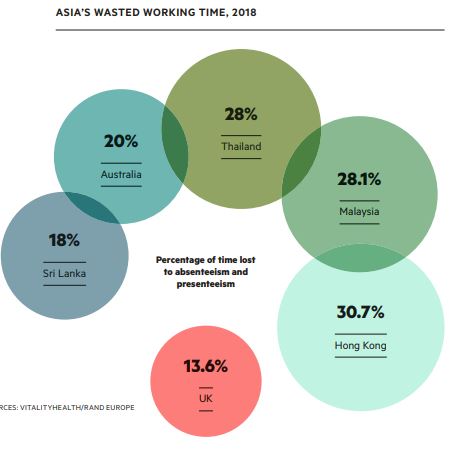 Sarah Mitchell-Hume didn't know anything about mental health when she had a panic attack at her desk. She was two years into her career in engineering recruitment --a job she absolutely loved when she suddenly became unwell. Sarah was diagnosed with depression. "I felt pressurized to go back to work, even though I was signed off sick," she recalls. "I was physically present but mentally I wasn't doing anything. And I'd just zone out, nothing was going on behind my eyes. I think I just cleared my inbox every day. It made me more ill. I should've been at home recovering."

Aged 24, she was just starting her career when she felt like it had come to an end.

If you break a leg, it's clear you need time off. Having a mental illness or suffering from workplace stress can be harder to spot. But Vitality's research has shown that these are the biggest factors behind the growing problem of people turning up for work when they're not fit enough to do their jobs.

Why do people go to work when they are indisposed?

New technologies and improved connectivity have infiltrated global businesses which have led to the emergence of new ways of work. Depending on the industry, being present in the office is no more a requisite and being productive. Many workers are equipped with all the necessary tools which have enabled them to work from anywhere. However, with this freedom, a wave of mistrust has emerged where managers can’t monitor and “micro-manage” their subordinated in person.

There still persists a stigma, commonly in the older generation that productivity suffers while working from home or remotely.

Sachin Khurana, Vice President & Chief People Officer at Happiest Minds Technologies, shares, “In a highly competitive corporate environment, unrealistic timelines and deliverables, meeting expectations from managers, leaders, and clients, employees are left with limited choice but to be present in office even if they are not keeping well. I see this as a reflection of the immature culture and leadership of the company rather than employee choice. These situations lead to a net loss for all stakeholders.” He also shared that the long term impact on the wellbeing and personal life of the employee and a big loss for the company in terms of higher medical cost, attrition, stress in the workplace, lower productivity, and negative impact on employer brand creating a challenge to attract good talent.

According to a report by Vitality, more than 40 percent of employees said their work was being affected by health problems - a figure that's risen by a third over the last five years

Similarly, the combination of distrust and the constant quest of maximum productivity have led some managers to view sickness-related absence with a critical eye.

In fact, according to a research study by Rise, presenteeism is more rampant in organizations that have recently experienced company downsizing or restructuring. Worried about their jobs, team members will tough it out in the hopes of proving their worth and value to their management and leadership. The same report also highlights that employee with lower hourly wages or who work only on a casual/part-time basis is more prone to presenteeism. Team members with lower income would be unable to make ends meet on a smaller paycheque and therefore cannot risk missing days away from work. Because of their financial need, these workers come into work even when they should take a sick day.

Asia is sitting on a public health time bomb, as the effects of long working hours, poor nutrition and sedentary lifestyles threaten to create poorer health outcomes for workers than their western counterparts.

Asia is sitting on a public health time bomb, as the effects of long working hours, poor nutrition and sedentary lifestyles threaten to create poorer health outcomes for workers than their western counterparts

However, according to a CIPD report, presenteeism is potentially more harmful to individuals and companies than sickness absence. And it warns that employee wellbeing needs to be taken more seriously by business leaders. 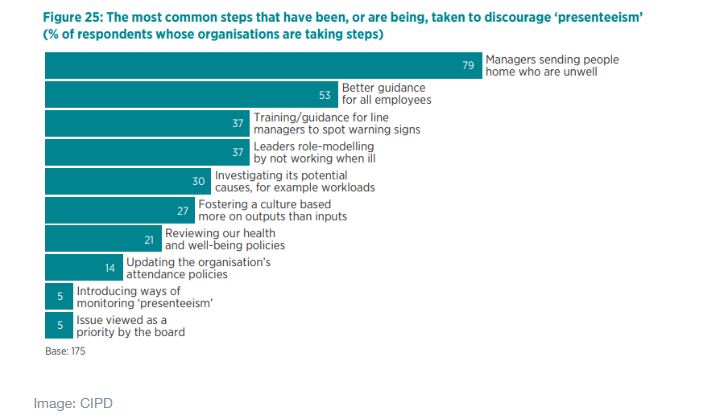 The costs to business are well documented. It has been estimated that presenteeism costs US firms $226 billion a year. In Japan, the cost of reduced performance due to working while unwell was $3,055 per employee each year. In the UK, “impaired work efficiency” due to mental ill health costs $790 per person each year, twice the cost of absenteeism.

But few companies are doing anything about it, with just under a third of those surveyed taking any action. Only 30 percent of those tried to investigate the cause of presenteeism.

Khurana shares, “In the service economy, innovation and customer experience are the only differentiators, and people are catalysts of these differentiators. It is the responsibility of the leaders and HR to ensure that practices like presenteeism do not become a new norm. We at Happiest Minds Technologies are addressing this proactively through our Happiness Evangelism, Mindfulness, and other people initiatives. Our employees present in different geographies goes through the mindfulness training. They have access to counseling support, wellness initiatives which help them deal with these situations like presenteeism. These initiatives are institutionalized and have executive sponsorship and have a far-reaching impact on creating an open and healthy work environment.”

What does it mean to show up at work? Is it the number of people in their seats clocking in their presence? Replying to emails as soon as they arrive in your inbox? We stopped using examples like these as measures of success. Presenteeism is a far greater concern for the modern people and culture pro—and unfortunately, it’s a lot more challenging to monitor. To track presenteeism, you need to be in tune with your team and be able to recognize when they’re struggling. More than that, your company must be willing to provide the tools and the time necessary for someone to recover, reset and returns to optimal productivity. As the research shows, it’s worth it—both for the business and for your people.

Anushree is Senior Manager–Research & Content Strategist APAC. She predominantly leads and manages research and branded content. HR Technology, Diversity & Inclusion, and Employee Experience are some of the key themes Ansuhree actively follows and writes about. She holds an MBA in Human Resource Development from Delhi School of Economics. You can reach her at anushree.sharma@gopeoplematters.com linkedin.com/in/09anushree twitter: @AnushreeS09
NEXT STORY: Challenges mount for global HR functions: TMF Report

Future of HR: 5 ways Human Resources will evolve in 2023

How much does it cost to be happy?

Bret Taylor to step down as Salesforce co-CEO; Marc Benioff to be chair and CEO

Corporate yoga: the mantra to a driven workforce