Article: What makes Blockchain top the list of most in-demand tech skills?

Many consumers may have heard of blockchain technology, especially in relation to cryptocurrency. Recently, the word "blockchain" is rising in frequency in corporate boardrooms and has become impossible to ignore. In fact, it is being noted by multiple media and research companies that the investment in the technology is going to be multifold. Worldwide spending on blockchain solutions is expected to grow from 1.5 billion in 2018 to an estimated 15.9 billion by 2023. Companies in nearly every industry are speeding up their efforts to create value for their business.

In 2019, the worldwide spending on blockchain technology stood at $ 2.7 billion. It has already disrupted the finance sector and continues to grow in the right direction.

Another great statistic is the valuation of blockchain in the food and agriculture market which is valued at $ 41.9 million.

According to the results of Deloitte’s 2020 Global Blockchain Survey conducted from Feb. 6 to March 3, 2020, 39 percent of 1,488 senior executives and practitioners in 14 countries said they have already incorporated blockchain into production at their companies —  a 16 percent increase on last year’s figures. The number rises to 41 percent when considering companies with over $100 million in revenue.

Blockchain as an emerging skill for 2020 and beyond

According to a recent study by LinkedIn, it is found that Blockchain tops the list of most in-demand hard skills for 2020.

The promise of blockchain which is essentially a shared digital ledger is huge. Advocates see it as a secure, decentralized, and cost- and time-efficient way to transparently track shipments and transactions of all kinds.

Skeptics, and there are many, raise concerns about the lack of standardized protocols, scalability, and excessive energy use (Bitcoin alone consumes as much energy as the nation of Switzerland).

Irrespective of that, the business world is optimistic about this technology. Blockchain has become a line of business for corporate biggies like IBM, Oracle, JPMorgan Chase, Microsoft,  Amazon, and American Express, to name just a few. Blockchain is now being used in industries ranging from shipping to healthcare, from farming and food safety to entertainment and gaming. 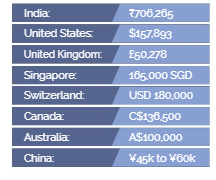 According to recent data by Blochchain101, here is a comparative analysis of the annual salary earned by a blockchain developer:

Blockchain developer, artificial intelligence (AI) specialist, and Javascript developer will be the most sought-after roles by employers next year, according to the professional networking platform LinkedIn’s “Emerging Jobs 2020” report.

With the refocus on profitability and bringing products to market, there has been an increase in blockchain design, marketing, and sales roles. Compliance, legal, and regulatory-related roles have also seen an increase in demand, which reflects the changing regulatory environment for cryptocurrency companies.

Most crypto job opportunities were found to be in San Francisco and New York. In Europe, the main hubs identified were London and Berlin, and in Asia, it’s Singapore and Hong Kong. In Latin America, it’s Buenos Aires.

Anushree is Senior Manager–Research & Content Strategist APAC. She predominantly leads and manages research and branded content. HR Technology, Diversity & Inclusion, and Employee Experience are some of the key themes Ansuhree actively follows and writes about. She holds an MBA in Human Resource Development from Delhi School of Economics. You can reach her at anushree.sharma@gopeoplematters.com linkedin.com/in/09anushree twitter: @AnushreeS09
NEXT STORY: Mental health is everyone’s business