On average, unemployment is the second most elephantine concern for economies around the world. According to a research conducted by Ipsos, COVID-19 World Worries, it was found that unemployment was the biggest concern for 27 countries. 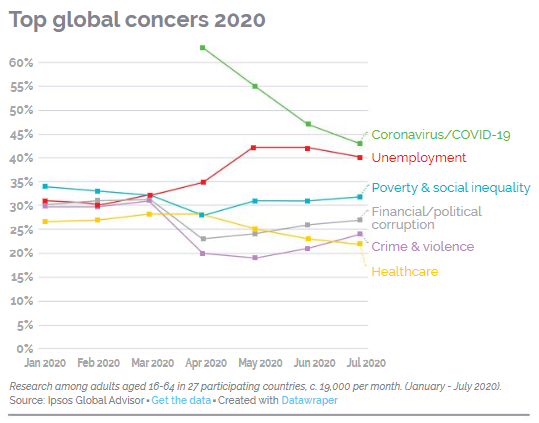 It is no news that COVID-19 has damaged the employment market hugely. Some of the biggest economies like the US are experiencing unemployment levels as that was experienced in WWII. While a lot of reports and experts suggest an optimistic overview of the labor market in the second half of the year, according to the International Labor Organization (ILO), the labor market recovery during the second half of 2020 will be uncertain and incomplete. In the baseline scenario, working-hour losses are likely to still be in the order of 4.9 percent (equivalent to 140 million full-time jobs) in the fourth quarter of the year. However, under the pessimistic scenario, which assumes a second wave of the pandemic in the second half of 2020, working-hour losses would be as high as 11.9 percent (equivalent to 340 million full-time jobs) in the last quarter.

Even in the optimistic scenario, which assumes a fast recovery, global working hours are unlikely to return to the pre-crisis level by the end of 2020.

Here are some critical hiring and unemployment sentiments we have observed in the last six months due to the ongoing pandemic:

The impact of the COVID-19 on the labor market clearly shows disturbing effects on workers and millions of businesses worldwide. Between April-June 2020, the world lost almost 400 million full-time jobs due to the pandemic, according to the International Labor Organization. Almost 59 percent of full-time jobs have been exterminated in the APAC region, while South Asia accounted for 110 million of the total 235 million full-time jobs lost this quarter. Manufacturers, airlines, and retailers have announced redundancies in the thousands. The youth have been particularly hard hit. 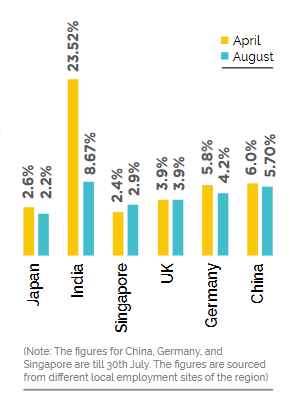 As reported by Bloomberg, below are the industries with the highest and lowest rates of employment growth for the most recent month.

Delving deeper, according to the various job sites, some of the top industries those were hiring were:

Jobs and skills of the future

In many respects, the future of work is already here. Amid the headlines exclaiming the loss of jobs due to pandemic and other changes brought by Artificial Intelligence (AI), Machine Learning and autonomous systems, it’s clear that the way we work and live is transforming. This evolution can be unnerving. Since we know change is inevitable, let’s look at what skills will be required the most with the changing nature of jobs.

LinkedIn, recently analyzed its data to identify the skills employers want most and how you can use them to raise your game. It says interpersonal “soft” skills (versus “hard” skills – abilities developed over time, like coding) are the most prized. This reflects previous research by organizations including Deloitte, and the World Economic Forum, which investigated the skills that will be needed in the Fourth Industrial Revolution in its Future of Jobs Report.

Because COVID-19 has increased the adoption of remote-working software, the need to strike the right tone of voice has, if anything, increased – not just for employees, but for employers too.

LinkedIn says it’s not just verbal cues that recruiters are looking for, but “digital body language”. Are you making the right impression with the tone you adopt in emails and texts?

Forget team-building exercises that involve building a bridge with a pair of styrofoam cups and a piece of string. Problem solving is much more than that. It’s about identifying a task, breaking it down into its components, and fixing it, according to the Institute of Chartered Accountants in England and Wales. It’s about the skills around it, like sticking with the task and doing your research. And just like clear communication, it’s seldom been more vital.

Leveraging Analytics has become critical more than ever. Getting strategic insight into what is really going on with business performance, customer choices, etc. can help focus on what matters most.

The current global crisis calls for leaders who can support and inspire people through challenges, and who can engage them in the flow of life and work during and post-pandemic. The way forward requires a strategic, thoughtful, compassionate approach to leadership.

Regardless of the industry you’re targeting, from senior to junior level, you need to create a positive experience for those who, ultimately, pay your wages. COVID-19 has been rich with lessons in how great customer service can make a difference. In times of uncertainty and crisis, people want information they can trust.

Anushree is Senior Manager–Research & Content Strategist APAC. She predominantly leads and manages research and branded content. HR Technology, Diversity & Inclusion, and Employee Experience are some of the key themes Ansuhree actively follows and writes about. She holds an MBA in Human Resource Development from Delhi School of Economics. You can reach her at anushree.sharma@gopeoplematters.com linkedin.com/in/09anushree twitter: @AnushreeS09
NEXT STORY: Am I audible???