Article: The future will be about equity, not just equality

Like any other Editorial room of a media house, the day in the People Matters editorial room wasn’t different; we were pitching stories, planning the cover, and debating on the upcoming International Women’s Day theme.

Women leaders, every media house will cover it

Should we talk about equality?

“Equality” that day became the most talked about subject in the Monday morning editorial check-in! And while it should be the focus of every business, we realize that we need to think about equality a little differently.

Can we create an equal workplace by giving them equal opportunities? Let’s take the example of Gender Equality. Yes, gender equality does not mean that women and men will become the same, but that women’s and men’s rights, responsibilities and opportunities will not depend on whether they are born male or female.

To decipher the meaning of the above statement, analyze the following image: 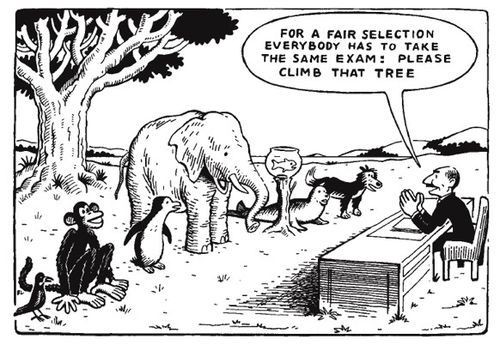 Imagine this situation while hiring for your organization. Can you have a fair selection process with the same standard recruitment process and policies?

But then, what about the culture around “The right people with the right skills get the job.”

While aspiring to become an organization that values merit as a principle and in practice is noble, its impact can be detrimental to progress. The assumption that everyone is treated the same based on their skills (equality) can hamper the organization’s and leadership’s capacity to be critical of the systems, policies, and practices that need a change for everyone to experience a fair and inclusive work culture (equity). It also threatens the human nature of bias (conscious and unconscious) and the role of our identities in how we experience the workplace differently.

In fact, the concept of equity cannot be better explained by Geoffrey Miller, an American psychologist in his paper on ‘The Neurodiversity Case for Free Speech’:

Imagine a young Isaac Newton time-travelling from 1670s England to teach Harvard undergrads in 2017. After the time-jump, Newton still has an obsessive, paranoid personality, with Asperger’s syndrome, a bad stutter, unstable moods, and episodes of psychotic mania and depression. But now he’s subject to Harvard’s speech codes that prohibit any “disrespect for the dignity of others”; any violations will get him in trouble with Harvard’s Inquisition (the ‘Office for Equity, Diversity, and Inclusion’). Newton also wants to publish Philosophiæ Naturalis Principia Mathematica, to explain the laws of motion governing the universe. But his literary agent explains that he can’t get a decent book deal until Newton builds his ‘author platform’ to include at least 20k Twitter followers – without provoking any backlash for airing his eccentric views on ancient Greek alchemy, Biblical cryptography, fiat currency, Jewish mysticism, or how to predict the exact date of the Apocalypse.

Newton wouldn’t last long as a ‘public intellectual’ in modern American culture. Sooner or later, he would say ‘offensive’ things that get reported to Harvard and that get picked up by mainstream media as moral-outrage clickbait. His eccentric, ornery awkwardness would lead to swift expulsion from academia, social media, and publishing. Result? On the upside, he’d drive some traffic through Huffpost, Buzzfeed, and Jezebel, and people would have a fresh controversy to virtue-signal about on Facebook. On the downside, we wouldn’t have Newton’s Laws of Motion.

Equality says, “Everyone is treated the same here.” Equity challenges and acts, “What policies, systems, and practices must be addressed or dismantled for everyone to be treated fairly?

The best way to approach equity is to work backward. Start by deliberating on what is important to your workforce and what equity would look like to them. Most often, organizations look at equity from a single lens of pay. Equity shouldn’t only be about pay. There are other forms of equity to consider like learning and development opportunities and possibilities for growth, success, and promotion. Even equality in the way projects are allocated up and assigned can go a long way to ensuring equity. Finally, communicate your equity goals to the entire leadership team. Securing their buy-in will assure they will be able to hold themselves accountable for their role in sustaining an equitable workplace.

Equity is truly the capstone of the journey through diversity, inclusion, and equality, and the best part about achieving equity is the unique and intangible sense of community and engagement it creates.

Anushree is Senior Manager–Research & Content Strategist APAC. She predominantly leads and manages research and branded content. HR Technology, Diversity & Inclusion, and Employee Experience are some of the key themes Ansuhree actively follows and writes about. She holds an MBA in Human Resource Development from Delhi School of Economics. You can reach her at anushree.sharma@gopeoplematters.com linkedin.com/in/09anushree twitter: @AnushreeS09
NEXT STORY: Women’s rights at workplace