Once seen as something of a checkbox exercise, diversity and inclusion is rapidly evolving to become a key pillar in talent planning. Companies are increasingly realizing that when you bring together people with different backgrounds, experiences and perspectives, they can unlock innovation and discover new ways to solve old problems.

But cultivating a culture of belonging, where people are empowered to express their ideas, doesn't happen overnight - which is why we're seeing a rise in the number of diversity, inclusion and belonging (DIBs) positions.

At LinkedIn, we looked at this global trend in the Asia-Pacific context to find out more about the rise of DIBs positions. We dig into why Australia is setting the pace across Asia-Pacific for a rise in diversity-focused roles and speak with leaders in the field, to get insights into how diversity roles are evolving.

Focus on diversity has grown globally

According to LinkedIn data, the global growth of diversity roles has risen 71% in the past five years, reflecting demand in organizations to focus on inclusivity and belonging. 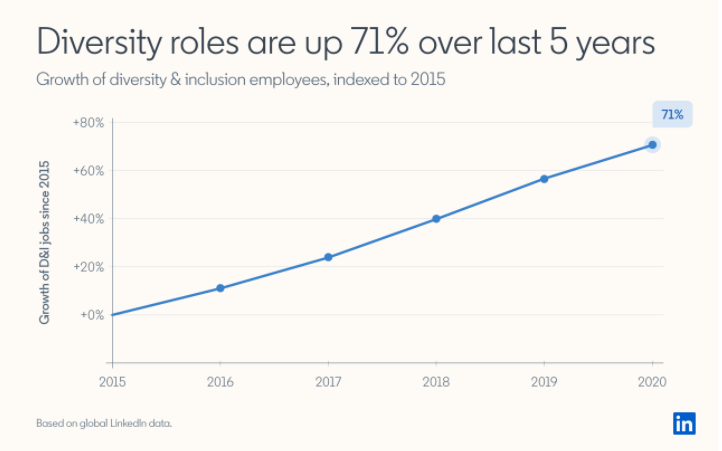 A tale of two trends

In Asia-Pacific, the picture is a little different. While the region has seen a growth in the number of DIBs roles, it is still lagging globally in the number of new and existing hires of these roles. The growth we’ve observed is encouraging, as organizations in the region begin to develop their diversity strategy, but clearly there is more work to be done.

But within the region, some countries are already at the forefront. Australia consistently ranks among the world’s biggest hirers for diversity roles. It is second only to the United Kingdom when it comes to the number of DIBs employees per 10,000 employees. It is also the region’s outperformer when it comes to hiring more DIBs roles.

This likely represents a number of factors distinct to Australia’s unique multicultural makeup, which is reflected in government policies, and likely drives corporate behavior. Similarly, initiatives like WGEA Employer of Choice for Gender Equality (EOCGE) encourage the employment of women, and there is a strong tradition of various associations driving inclusion in the community and business.

What this also tells us is that diversity doesn’t happen on its own, or overnight. To create meaningful change, organizations must implement measurable goals. In Asia-Pacific, LinkedIn data shows that the top growing roles are diversity managers and diversity officers, while the Head of diversity is also appearing more frequently.

The rise in DIBs roles suggests that organizations are working on their diversity strategies, and investing in a team that can deliver structural change and develop strategies on how the organization can reach its diversity goals. A team dedicated to diversity is a great start, but it needs to be coupled with executive support and company-wide accountability.

Diversity drives success - but you need to have a framework

Diversity and inclusion has evolved beyond a compliance effort, but it’s also quickly evolving beyond a talent attraction and retention measure too. Diversity is now seen as a key tool to drive better risk management, strategy, and ultimately better outcomes.

One of the world’s largest organizations, French food services company Sodexo, is often held up as a trailblazer for its Diversity Index and Balanced Scorecard, a measure it links to bonuses. It means some 16,000 managers are held accountable for diversity measures, which include hiring, promotion and retention rates, as well as other inclusive efforts.

It’s clear that diversity can’t be a tick-the-box exercise, but has to be a developed and fit for purpose approach to each organization. In 2016, BHP recognized that its male-dominated industry was unlikely to change, unless it, as one of the industry’s largest companies, made significant contributions. It announced an ambitious plan for half of its workforce to be women by 2025. At the time only 17% of its workforce were women, says Fiona Vines, Head of BHP’s Inclusion & Diversity and Workforce Transition teams.

While the focus has been on balancing the gender gap, BHP has found when work was made more inclusive for women, it also became more accessible for other people too.

“We used our own performance data, to show that where you have more gender-balanced teams, where you also have teams that feel more included, teams are significantly safer, more productive in some areas of production, and definitely more engaged," shares Fiona Vines, Head of BHP’s Inclusion & Diversity and Workforce Transition

While the mission is still ongoing, Fiona says she is already seeing diversity and inclusion roles evolving - from someone who plans the strategy, to someone who helps the entire organization to be responsible for reaching goals.

Anuradha Khosla who heads HCL diversity team also sees the role of diversity in organizations evolving, to become a whole company effort, not just one led by HR. Any efforts to drive inclusivity requires a well-researched framework that can be supported throughout the business.

“HCL is all about innovation and generating new ideas. So we map it back to the diversity mix and see how that is helping more innovation and more growth in the organization. We have three pillars where our focus lies: Talent attraction, talent retention, and talent development.”

A focus on diversity delivers across the board

LinkedIn data shows that DIBs teams can be correlated with success. Companies who invest in their diversity scheme are more likely to be seen as inclusive places to work and ultimately foster a more diverse workforce. 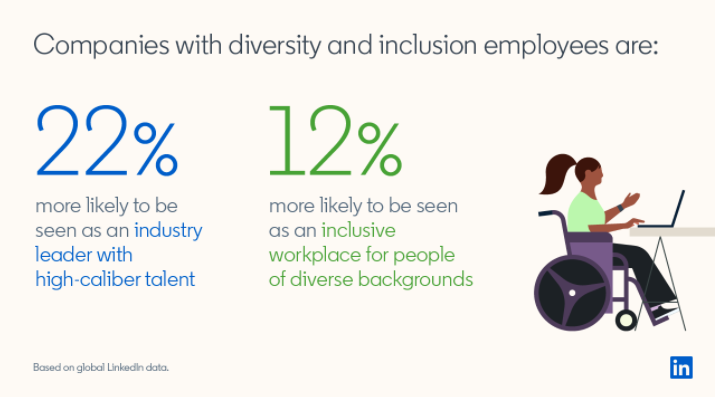 While the business case for diversity is becoming more and more robust, diversity and inclusion leaders still acknowledge that bias against change and difference remains a hurdle. Structural change and efforts to dismantle bias require time and organizational buy-in. It doesn’t happen overnight, and workplaces need to commit to the long haul.

However, there is a growing sense that scorecards and accountability against diversity metrics will become the new HR norm. If your organization is still working through its diversity strategy, having a dedicated team leader or workforce who can implement strategies, and are willing to try out new approaches is key. But this needs to be accompanied with an organization-wide effort - diversity and inclusion can’t operate in a silo separate from the rest of the business.

Having diversity and inclusion specialists may inadvertently send a message that efforts are under control, and others can take their eye off the ball. A good senior diversity team will bring everyone on the journey, and show them, through education and awareness, that they all have a role to play.

This article was first published on LinkedIn.

Charting the evolution of HR in 2023

eBay plans to slash 500 jobs in latest round