It has been an interesting start of the New Year for the businesses and leaders as businesses gradually bounce back from the effects of the pandemic. The first three months have seen many new appointments and movements among the C-Suite. Here’s a quick look at some of the major leadership movements from Jan-Mar 2021.

Odd Bolin: Truecaller appointed Odd Bolin as their new Chief Financial Officer (CFO). Odd will be joining the management team and overseeing the financial management and operations to support the company’s growth, and to prepare the company for an initial public offering (IPO.) Prior to this appointment, Odd was the Group CFO at Sinch, a global player in cloud communications for mobile customer engagement where he helped take the company public and led half a dozen international acquisitions, including Sinch’s 130 million USD acquisition of Mblox in 2016.

Olivier Sevillia: Capgemini announced the appointment of Olivier Sevillia as its Group Chief Operating Officer. In this role Olivier is responsible for the Group’s strategic business units and sales, with a focus on applying the Group’s deep and broad industry expertise to be a strategic business partner to its clients. Previously, Olivier had been CEO of Capgemini’s Europe  Strategic Business Unit since July 2018.

Mary Dickerson:  Radian Group announced the appointment of Mary Dickerson as Executive Vice President, Chief People Officer. Before joining Radian, she served as Executive Vice President, Human Resources at DLL Group, a subsidiary of Rabobank Group, where she led a team of 150 human resource professionals globally for its 6,000 employees in 32 countries.

Pat Gelsinger: Intel appointed Pat Gelsinger as its new Chief Executive Officer, effective Feb. 15, 2021. He is a 40-year technology industry leader with more than four decades of technology and leadership experience, including 30 years at Intel where he began his career.

Adam Selipsky: Amazon roped in Adam Selipsky from visual analytics firm Tableau, to be the next CEO of Amazon Web Services. Previously, he was the CEO of Tableau and also spent a decade at AWS too.

Melissa Schoeb: Nokia appointed Melissa Schoeb as Chief Corporate Affairs Officer and member of the Group Leadership Team effective from 12 April 2021. She is joining Nokia from Occidental, one of the leading independent oil and gas companies, where she is the Vice President, Corporate Affairs. 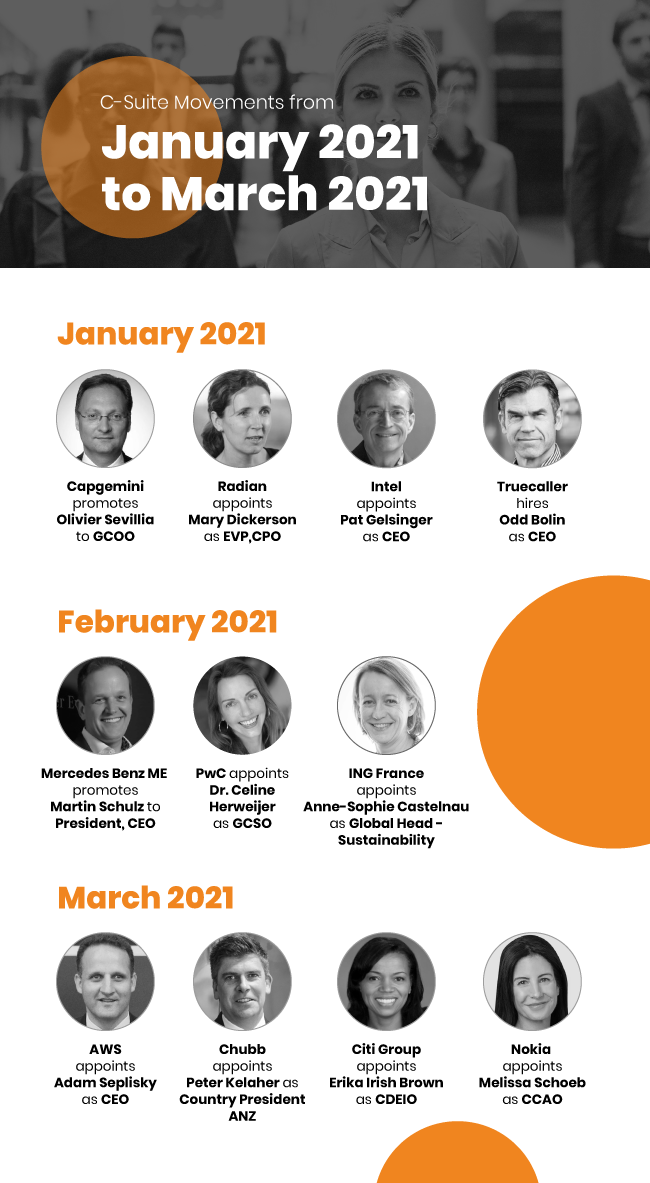 Note: We have tried to include all the essential movements among the senior HR leaders. If we have missed anyone, please let us know and we would be happy to add it to our list. See you all in the next quarter!

Ajinkya Salvi is working as Senior Associate - Content with People Matters. You can reach out to him at ajinkya.salvi@gopeoplematters.com
NEXT STORY: With a distributed workforce, companies need to be even more aware of compliances: Charles Ferguson, Globalization Partners

We are demanding significant change in everything we do: KONE's Minna Rouru

Changing trends in employee experience in 2021

What if your manager changes just before promotion?