The highest-paid CEO of 2018 as per the report was Genting head Lim Kok Thay. His annual remuneration stood at RM284.61 Mn (US$68.6 million) and came from his two positions as Head of Genting Bhd and Head of Genting Malaysia Bhd.

While he is probably the richest CEO in Malaysia, he is the world’s 436th richest man and Malaysia’s seventh richest man, with a total wealth of US$4.4 Bn (RM18.25 Bn), according to Forbes.

The list of top 100 CEOs based on their pay has been released by Corporate Governance Monitor report published by Malaysia’s Securities Commission (SC).

The list has been made after assessing the total pay of CEOs of the top 100 listed companies on the Malaysian stock exchange’s main market. The companies have been selected based on their market capitalization (value on the stock market) as of December 31, 2018.

However, they could obtain CEO salaries for only 84 of the 100 companies, as the remainder either did not disclose their CEO’s salary or reported it in bands of RM50,000.

If we look at the list closely, half of the CEOs in the top 20 were from family-controlled companies. 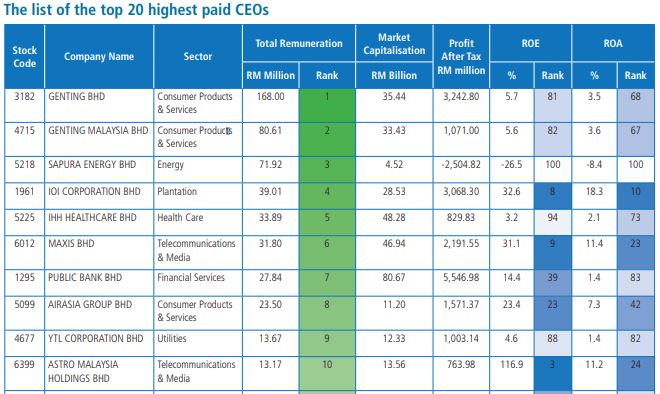 Kim clearly leads the chat, with a salary so high that his remuneration was well over 3.5 times that of the CEO in second place: Sapura Energy boss Shahril Shamsuddin, who earned RM71.92 Mn.

In fact, Lim’s monthly remuneration of RM23.6 Mn also was more than Prime Minister Mahathir Mohamad’s. The PM had declared his monthly income on a public government portal to be about RM75,900.

If we consider the sectors of these companies, the highly paid CEOs mostly come from the Telecommunications and Media and Financial Services, while the REITs sector had the lowest median remuneration.

Revealing the remunerations of top CEOs and companies help firms across industries to get a sense of market trends and relook at their current compensation strategy. It helps give an overview to professionals, however, often it is hard to circle out any commonalities and the data is often skewed. While these lists act as a good reference point, they are not enough to decide the remuneration of your company's CEO and other staff. Context matters and individuals performance, expertize and value they add to the company is what is more crucial than any market trend.

Drishti Pant is Senior Associate - Content with People Matters. You can reach her at drishti.pant@peoplematters.in
NEXT STORY: Pandora to layoff 1,200 employees

35% of working women are not confident that they can retire comfortably: Report

You can’t get paid for smoke breaks in Spain