Blog: 2 weeks of #MeToo campaign: It's not over yet

It’s been 2 weeks of the #MeToo campaign – restarted by actress Alyssa Milano on Twitter which had an overwhelming support from women, men across the globe. She had stated on Twitter that “Suggested by a friend: If all the women who have been sexually harassed or assaulted wrote ‘Me too’ as a status, we might give people a sense of the magnitude of the problem,” These two words evoked a sense of solidarity among women across the globe to come out and share their traumatic accounts of sexual abuse. This happened after the allegations against movie mogul Harvey Weinstein surfaced. 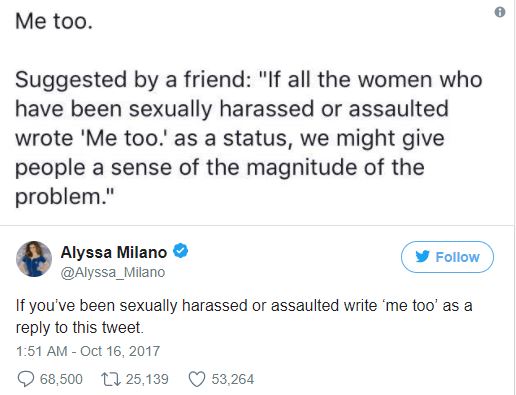 It took a day for the #MeToo campaign to become of the largest trending topics on Twitter with over half a million tweets and equal number of Facebook shares. Facebook said that within 24 hours, 4.7 million people around the world engaged in the #MeToo conversation, with over 12 million posts, comments, and reactions.

Eminent personalities around the world gave it the much-needed support – right from George Clooney to Debra Messing to normal ordinary women- who with their #MeToo posts came out as brave souls. Most of the FB posts were about how almost all of them faced some kind of overt, subvert sexual harassments at the hands of fake innocents.

Who started the #MeToo campaign?

Originally, Tarana Burke, an activist founded the “Me Too” movement in 2006 because she, as someone who experienced sexual assault, wanted to do something to help women and girls — particularly women and girls of colour — who had also survived sexual violence. Burke is also the founder and director of Just Be Inc., a non-profit organization launched in 2006 that is “focused on the health, well-being, and wholeness of young women of colour.”

The #MeToo campaign coincided with one of the most auspicious festivals in India. Diwali spiritually signifies the victory of light over darkness, good over evil, knowledge over ignorance, and hope over despair, and the #MeToo campaign is a start to that. In the past 2 weeks, my FB, Twitter have been bombarded with soul-baring accounts of my friends, acquaintances, shared posts of people who have been molested, sexually abused and were violated in different forms by their own, office colleagues, male bosses, family members, friends.

Incidentally, sexual harassment at workplace has been also gaining momentum in the recent past with the blog post of ex-Uber employee Susan Fowler who ripped apart the management of the cab-aggregating company to shreds with her account of sexual harassment at Uber. It killed the entire Uber dream of millions of people, and the company had to go in for leadership changes (with various challenges, including temperamental issues of Travis Kalanick) when it came to re-creating its reputation back to normal.

Pankaj Sharma, Chief Trustee at Centre for Transforming India (CFTI) and a global expert on workplace sexual harassment had shared with People Matters that “sexual harassment is a global phenomenon and is ubiquitous in nature. The organizations indeed have to benchmark and develop best practices from two perspectives - one being the human resource and people management and second being the legal framework for the same.”

In India, every corporate need to set up Sexual Harassment committee to tackle such allegations. It has been mandated by the Sexual Harassment of Women at Workplace (Prevention, Prohibition & Redressal) Act, 2013 which is an extension of the earlier Vishakha Guidelines. Corporates having 10 or more employees need to set up a committee at each location so that women can feel comfortable to come forward and make a complaint to local members of the Committee. The committee members are legally obligated to help the woman making the complaint in writing, in case, she is unable to do so for any reason.

One of India’s best-known software executives Phaneesh Murthy had to resign from Infosys in 2002 after his secretary Reka Maximovitch accused him of sexual harassment. Infosys settled for $3 million outside court. Murthy was also sacked by an American IT firm – iGATE Corporation in 2013 on sexual harassment charges.

For once, let’s not read between the lines. The behaviour of a predator cannot just vanish upon request or forgiveness; you need to change your mindset and attitude (which requires medical help) and cultivate a sense of empathy and respect towards all.

In 2015, Shreya Ukil, an India-born British citizen, accused Wipro of sex discrimination, unequal pay, harassment and unfair dismissal, and sought compensation of up to £1 million, according to a claim at the central London employment tribunal. Ukil had said that she was manipulated into an affair with married SVP Manoj Punja, the former head of Wipro BPO who had earlier resigned.

But these were sporadic incidents which came to light because of the high-profile tag that came along with it. People wrote about them, and then forgot.

But #MeToo campaign seems to have ‘nudged’ the souls of the globalized citizens who just need to put forth their thoughts that ‘saying yes to compromise for a raise or a project’ is not the perfect way to climb the ladder.

The Guardian in one of its detailed reports on the #MeToo campaign talks about how “one anonymous woman used the #MeToo hashtag to accuse Vice journalist Sam Kriss of forcibly kissing and harassing her. Kriss posted an apology on Medium, but has since been sacked from Vice and had his membership to the Labour party suspended. On Thursday, British GQ’s political correspondent, Rupert Myers, was also fired after a nu#mber of women made allegations against him on Twitter. The next day, Vox Media’s editorial director, Lockhart Steele, was fired over allegations made against him in a Medium post.”

Critics who meekly raised their voices by saying ‘why didn’t you raise your voices earlier’, have been slammed on social media. Clearly, there has been no one who could not feel the angst of the suppressed emotions of the victims.

The Guardian quoted Caroline Criado-Perez, co-founder of The Women’s Room and the feminist campaigner who forced the Bank of England to have female representation on banknotes, that “It is about so much more than Harvey Weinstein.”

Harvey Weinstein did one good – he brought out the solidarity among people in this segregated world which we were waiting to experience. And let’s not push the #MeToo campaign to die a natural death, let’s invigorate this slogan for a better and equal world for all – humans and other creatures.

Shalini Sengupta is the Former Assistant Manager – Content at People Matters.
NEXT STORY: Nadella's #HitRefresh - A culture masterstroke for Microsoft

Why 'quiet quitting' is really about entitled employers

Getting through the 'Monday Blues'

Have you equipped yourself to survive if you are lost in a jungle?

Navigating the hybrid working paradox: Why, What and How