Earlier this year, the government of Indonesia announced that it will invest US$35.5 Bn this year to improve the employability of the country’s workforce.  The efforts come as the government wants to strengthen educational establishments to help develop the required workforce for the ‘Fourth industrial revolution ’.

As per the latest LinkedIn Report on the emerging jobs in Indonesia, with the fourth largest population in the world, Indonesia’s own middle class is expected to double from 74 million in 2017 to 141 million by 2020. The scale of Indonesia’s young and increasingly affluent population is rapidly driving changes in consumption habits and behavior. Despite 50 percent of its large population still being offline, Indonesia already has the largest and fastest growing online economy in Southeast Asia.

However, to make most of the opportunity, the country has to be careful in facing the future. And has to face challenges in its present. Take, for instance, the fact that the unemployment rate in Indonesia has increased to 5.34 percent in the third quarter of 2018 from 5.13 percent in the first quarter of 2018. In addition, as per a report by the International Labor Organization (ILO), Indonesia has severe shortages of skilled labor due to the out-migration of skilled workers, an aging workforce and the lack of capacity to provide training.

The report stated also highlights the inadequate training programs available in the country. The report stated that the training programs available are often out of date and do not meet the industry requirements. Also, the training is not always equally available to all sectors of the community. Currently, more than 70 percent of the workforce in Indonesia is only elementary school graduates and only less than 5 percent of the existing workforce has a bachelor degree and above.

The rising demand for digital in Indonesia

However, there is a silver lining to the cloud as well. Besides the advantage of the demographic dividend, Indonesia boasts of a burgeoning startup ecosystem, with four 4 out of 10 unicorns in Southeast Asia based out of Indonesia. This is fueling the demand for digital talent as is the rise of the connected economy. In addition, the government’s focus on making Indonesia ready for the 4rth Industrial Revolution is driving the demand for digital talent as traditional industries embark on digitalization. More so, the private and public organizations are partnering to build this digital talent in the country.

So while the Ministry of Communications and Informatics and five state universities in Indonesia have launched the “Digital Talent Scholarship”, which will consist of intensive courses to rapidly bring talent into the market, organizations such as Google is partnering institutions to train 100,000 Android developers by 2020.

Which brings us to the next logical question-which jobs will be in greater demand as Indonesia ushers into the digital revolution?

LinkedIn has crunched its enormous stack of data from the past five years to identify the top emerging jobs in Indonesia. Here is a snapshot of the top five emerging jobs in the archipelago. 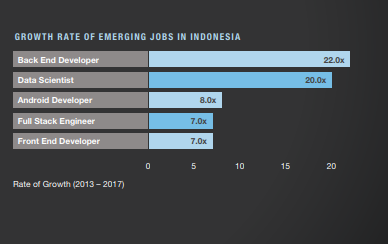 Back End Developers are responsible for building the backend of web applications and critical system functions like database. Digital transformation requires huge amounts of digital infrastructure. As Indonesia ramps up its role in the Internet economy, organizations need talent that can build and develop their backend tech capabilities. Online shops, startups and other digitalization projects all require such infrastructure, and talent who can build and navigate it.

This is an obvious one given the rise of the startup ecosystem and ecommerce in Indonesia. Ecommerce is fueling the demand for Data Scientists to collect customer data, analyze these insights and make recommendations on what customers are looking for. It will continue to do given that the online commerce market is projected to grow up to eightfold by 2022.

As per the report, many Data Scientists in Indonesia are coming from academia. This shows that there is a clear demand for their skills, which are busting out of research and into practical application. The promise of interesting work and projects might help lure this talent from academia

The dominance of Android users in Indonesia is fueling the demand for tech talent that can deliver digital solutions into consumers’ pockets. Android is the preferred operating system for smartphones in Indonesia and in 2017, its market share grew to 88 percent. Given that any organization that wants to reach their consumers through mobile will need such Android-trained talent, the demand for Android Developers will continue to rise.

Indonesia’s digitalization drive requires efficient, flexible and responsive tech talent like Full Stack Engineers. A combination of Front and Back End web and application development, Full Stack Engineers are the backbone of tech talent – able to run a digitalization project from start to finish, on both a technical level, as well as from a project management perspective. With one of the highest startup densities in the region, over one startup per 86,836, Indonesia’s startups are reliant on Full Stack Engineers to not only write excellent code but to expand their product offerings to customers. This demand will continue to grow further with the growth of the startup ecosystem.

Front End Developer takes an active and crucial role in the development of new features and enhancements to applications and web properties used by consumers and businesses every day. They are sought after by organizations that want their digital offerings and services to stand out in the competitive online commerce world. Again the rise of the Internet economy coupled with the success of businesses like Lazada Indonesia, Tokopedia and Bukalapak will continue to fuel the demand for front end development skills.

Shweta is working as a Senior Features Writer with People Matters. You can reach out to her at shweta.modgil@gopeoplematters.com.
NEXT STORY: Younger generations feel unsettled about future: Deloitte

54% of companies can’t find the skills they need