The last three months have been quite tough on jobs across the globe. We have seen multiple senior leadership exits across the industry and despite the pandemic, there have been some major appointments of senior HR professionals. Some moved to a new organization, some of them got elevated while others headed toward the entrepreneurial route.

Read on to highlight some of the significant movements which took place from April  2020 to June 2020.

Shelly Holt- PayScale, which deals in on-demand cloud-based compensation software and data, announced Shelly Holt as the company’s new Chief People Officer. In this position, Holt will oversee all of PayScale’s human resources functions, including attracting new talent for key positions throughout the company and further developing existing talent as PayScale continues its rapid expansion.

Bruce Maisel - EBI Consulting, which deals in the area of engineering, and architectural due diligence and consulting services, has appointed Bruce Maisel to their executive leadership team. Bruce Maisel is the new Chief People Officer, and he will lead EBI’s Human Resources function and strategy. He will partner closely with the company’s leadership team to continue building a culture of employee engagement that attracts new colleagues, supports the development of its talented employees, and advances the organization’s growth.

Deborah Mcfarlane - Industrial staffing firm EmployBridge has announced that Deborah Mcfarlane has joined the company's senior management team as Chief People Officer, leading the human resources organization and serving as steward of EmployBridge's culture evolution as it advances its people-first strategy to the next level. Deborah has over 20 years of experience in executive human resource roles with US-based and global operations. Most recently, Deborah served as head of human resources for HD Supply Facilities Maintenance in North America.

Mike Lantz- Quontic, the adaptive digital bank, has announced the addition of Mike Lantz, as Chief People Officer, a newly created position to further accelerate Quontic’s reputation as a destination employer. As Chief People Officer, Mike will foster a culture where people can grow and develop professionally and be part of the team that sets the pace for innovation in banking. As the bank expands its digital footprint nationally, Quontic is committed to shaping its workplace to attract the best and brightest talent to join its high-performing team.

Díaz de la Fuente- She joins Tupperware Brands as the Chief Human Resource Officer. Following successful careers in human resources at multinational companies including GE and Herbalife Nutrition. Most recently, she was head of human resources at El Palacio de Hierro, a worldwide recognized retail group based in Mexico. In that role, she led the company's organization redesign strategy to deliver year over year savings and recruited the talent base needed to execute the company's strategy.

Susan Yun - Information Builders the data and analytics software and solutions company announced the appointment of Susan Yun to its senior leadership team as Chief People Officer. In her role as Chief People Officer, Susan will partner with the senior leadership team to attract and retain top talent, deliver training and performance management, and ensure best practices for change management.

Laurie South- She joined Jamul Casino as its new Vice President of Human Resources.  She brings more than two decades of experience leading human resources divisions, primarily for tribal casinos throughout the West Coast.  She joins an all-star team of leaders responsible for making Jamul Casino the most Genuinely Generous gaming destination in San Diego County. She has worked in senior human resources leadership roles since 1998.  Much of her experience has been gained with tribal gaming organizations.

Anne Lebel- Capgemini announced the appointment of Anne Lebel as Chief Human Resources Officer (CHRO) and Group Executive Board Member, effective July 20, 2020. Anne brings to the Group over two decades of experience in leadership development and talent management on a global scale. She takes over from Hubert Giraud, who recently moved to a new role at Altran, part of the Capgemini Group. Anne will report to Aiman Ezzat, CEO of Capgemini. 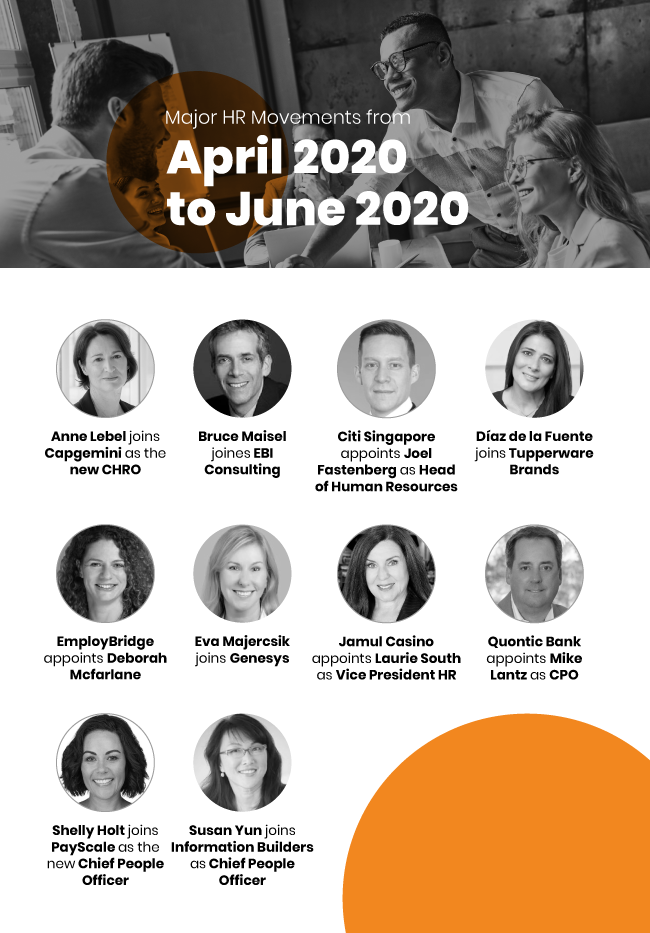 Former Associate-Editor, People Matters. You can contact him at +918010998491
NEXT STORY: Microsoft makes major commitment to skills training for 25Mn people across the globe

Why is data analytics so important for business success?

View from the Top | Kevin Chin of Arowana

Winning the war on talent by building serious digital muscle

View from the Top | Kevin Chin of Arowana

View from the Top | Behyad Jafari of the Electric Vehicle Council