The last three months have been quite tough on jobs across the globe. We have seen multiple senior leadership exits across the industry and despite the pandemic, there have been some major appointments of CEOs, COOs, and MDs. Some moved to a new organization, some of them got elevated while others headed toward the entrepreneurial route.

Jamie Iannone: eBay Inc. has announced the appointment of Jamie Iannone as Chief Executive Officer, effective April 27, 2020.  He has also been elected to the Company's Board of Directors. Most recently Iannone was Chief Operating Officer of Walmart eCommerce. Before being promoted to COO of Walmart eCommerce, he served as CEO of SamsClub.com, the eCommerce unit for the $57 billion Sam's Club.

Martin Chee: IBM announced the appointment of Martin Chee as the new Managing Director of IBM Singapore. Martin will harness his experience in spearheading IBM's digital transformation initiatives in Singapore. He will be responsible for business growth and strengthening IBM’s partnership with clients for a cloud and cognitive-led digital transformation of their businesses. Martin will report to Patricia Yim, General Manager, IBM ASEAN.

Eileen Chua: Eileen Chua has been named Managing Director (MD) for Singapore by German enterprise software giant SAP. She takes over from Khor Chern Chuen, who held the role for about three years, and is now the Singapore-based chief operating officer for SAP South East Asia. The newly appointed MD for Singapore, Chua, will report directly to Rachel Barger, President and Managing Director of SAP Southeast Asia. Barger shared that SAP remains confident in Singapore as a business hub, given the access to a global talent pool, innovative culture and strong government support for the digitalization of industries.

Kevin Mayer: TikTok, the popular short-video app has appointed Kevin Mayer as the new CEO. Mayer will also be the Chief Operating Officer of TikTok's Chinese parent company, ByteDance, and report to its founder and CEO, Yiming Zhang. Mayer has previously led Disney's streaming business and was known for his role in building Disney through mergers, including the industry-changing 2019 acquisition of 21st Century Fox's TV and film business that created an entertainment behemoth.

Aiman Ezzat: Aiman Ezzat has succeeded Paul Hermelin as Capgemini’s new CEO. Paul will continue to be the Chairman of the Board. During his tenure as Chief Operating Officer (from January 1, 2018 to May 2020) and prior to this as Chief Financial Officer, Aiman reinforced both the Group’s position as a global leader as well as its financial resilience. He also played an instrumental role in the implementation of the Group’s new operating model.

Thierry Delaporte: Thierry Delaporte joins Indian multinational corporation Wipro as Chief Executive Officer and Managing Director. The previous business leader Abidali Neemuchwala will relinquish his position as CEO and MD on June 1. Until then Rishad Premji, Chairman, Wipro Limited will oversee the day to day operations of the company until July 5. Then Delaporte will take over from July 5. Based in Paris he will report to Chairman Rishad Premji. Until recently, Delaporte was working with Capgemini Group as the Chief Operating Officer and was also a member of its Group Executive Board.

Wern-Yuen Tan: PepsiCo announced that Wern-Yuen Tan has been appointed Chief Executive Officer of Asia Pacific, Australia, New Zealand and China ("APAC"), overseeing all of PepsiCo's operations in the region. Tan, who will begin his new role on June 15, 2020, will be based in Singapore and will report to PepsiCo CEO Ramon Laguarta. Commenting on his new role, Tan said, “I look forward to working with Ramon and the entire leadership team to drive growth and localized solutions in this dynamic part of the world." 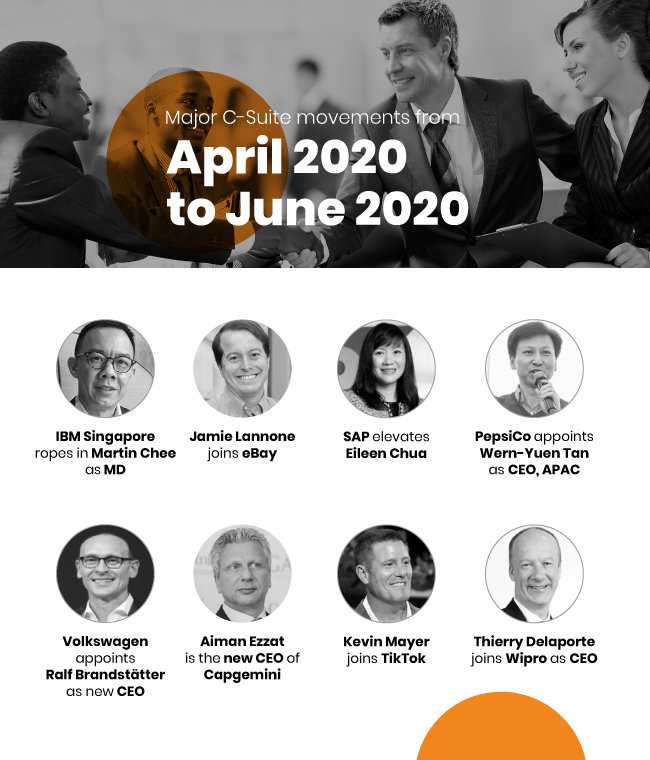 Abid is working as an Associate-Editor with People Matters. You can reach him at abid.hasan@peoplematters.in or contact him at +918010998491
NEXT STORY: 21 HR Jobs of the Future

Post-COVID, which aspect of work will technology impact the most?

Companies that succeed amid COVID-19 will be those that prioritize people: Walmart’s Donna Morris

Driving a digital mindset and culture

Hilton appoints Chris Carr to Board of Directors